These are some notes and references from a talk I gave at EuSEM 2019 in Prague. 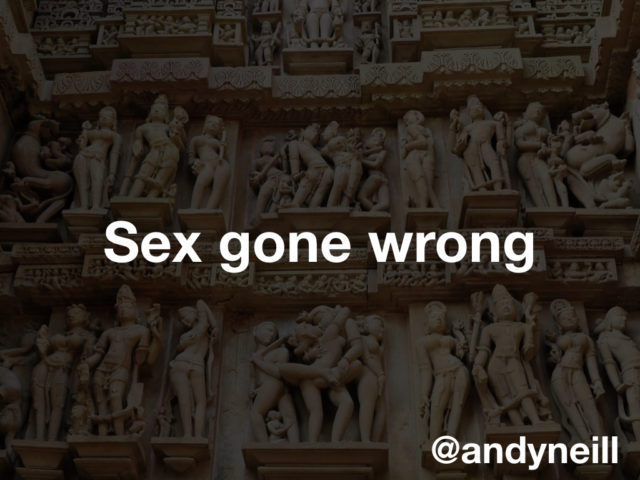 this talk deserves a little preface.

you’ll notice that this talk has covered almost exclusively male injuries. There are a few reasons for that. They’re common and dramatic and as a talk they can be quite entertaining. Female sexual injuries on the whole are a different story.

Many of them are relatively minor and women may well present to gynae as an OPD rather than the ED. If you see someone with vaginal or anal lacerations with a story of consensual intercourse then think twice. It may well be consensual but the literature is fairly clear that injuries to the female anogenital tract with intercourse are often non consensual and it’s worth delving a bit deeper into the history and using the same techniques you might for anyone with potential IPV. This may mean getting the partner out of the room it may mean raising it directly to the patient.  Of course the same thing holds true for male injuries but the sad truth of it is that females are incredibly more likely to be raped and sexually trafficked than males are.

Occasionally you will see a rupture of the vaginal wall that can cause significant external and internal blood loss and haemoperitoneum following intercourse is well described though often not that serious. 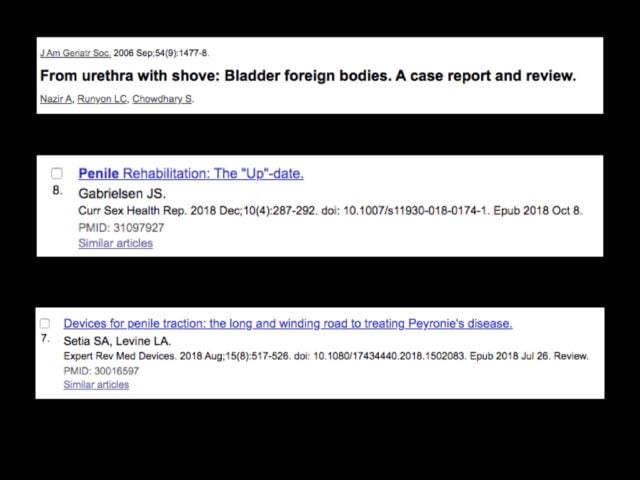 Congrats to the authors who managed to get papers with these titles onto pubmed. 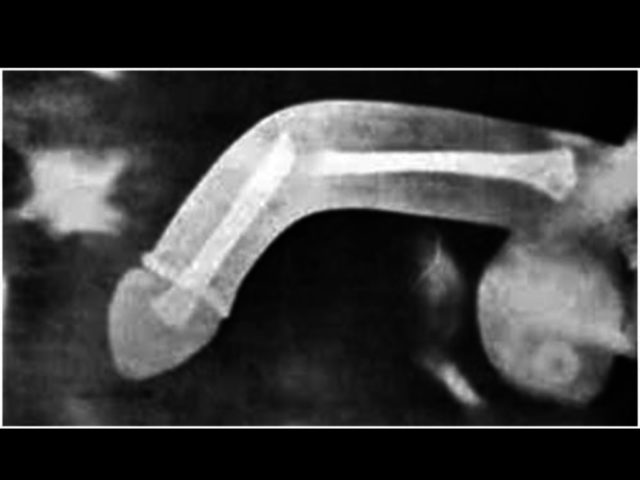 i did a little bit of googling for this talk. Actually i’ll confess i did a lot of googling for this talk and honestly my browser history is not something i would like publicly shared at this point. But when you search penile fracture this is a common image that “pops up” no pun intended… It is of course something someone has put together on photoshop but it has been reused with great alacrity throughout a lot of the men’s sexual health type websites – usually with the label “penile fracture” and no sense of irony

we’re looking at three injuries in that context – 1) penile fracture, 2) urethral injury, 3) extratunical haematoma (which is a non surgical injury generally, and usually doesn’t have the crack and has a gradual rather than sudden detumesence) 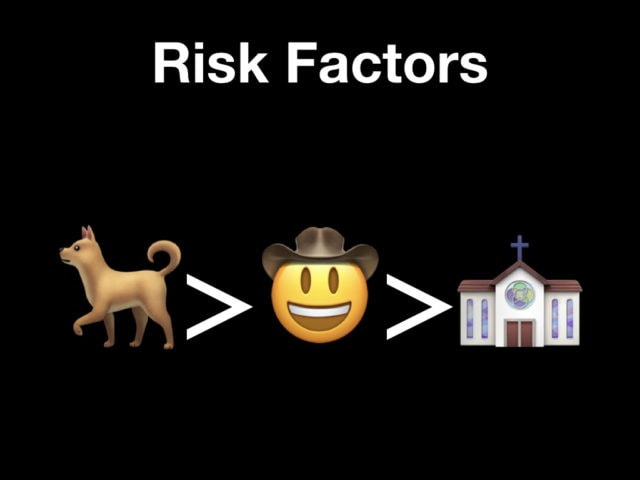 popping/cracking with rapid detumesence are the clinical features (along with pain). there is a small retrospective study looking at how important the sound is and they gave it an odds ratio of  4.25 and the absence of the sound decreased likelihood of surgical fracture from 90 to 70%.

imaging is not neccesarily needed but it  can be useful  to confirm diagnosis as there is a small number of pseudo fractures that probably do not need any surgery. timing of surgery is generally within 6-12 hrs. the integrity of the TA is the single most important predictor of need for surgical repair.

about 20% will have a urethral injury and blood and retention are the two give aways. these are difficult to diagnose and many end up with a retrograde urethrogram or a cystoscopy

these are worth discussing as they do seem to be reasonably common and come with a reasonable degree fo morbidity. 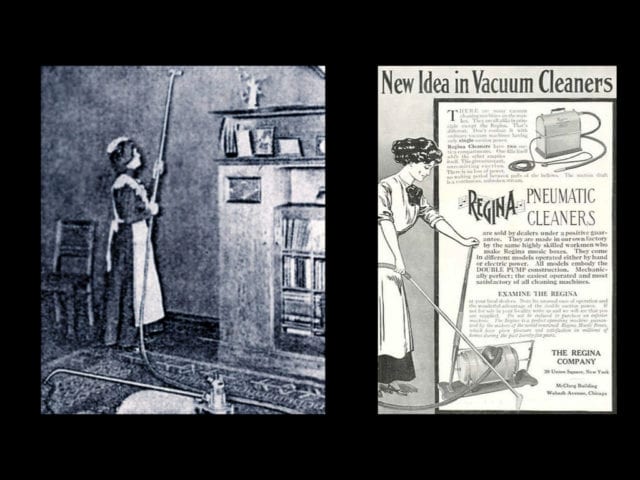 by the 1950s these were fairly common appliances to have around the house. 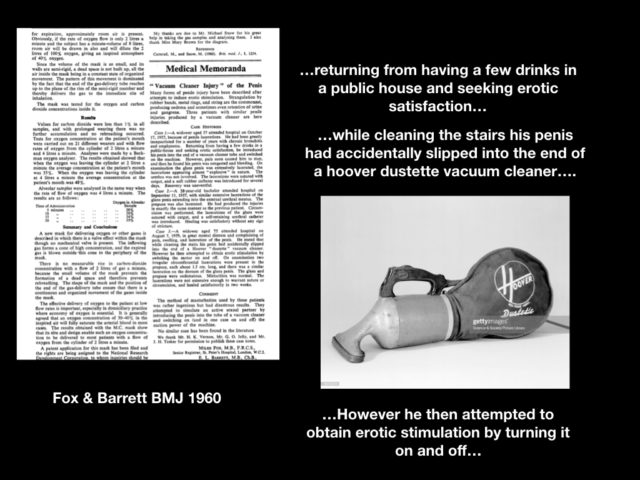 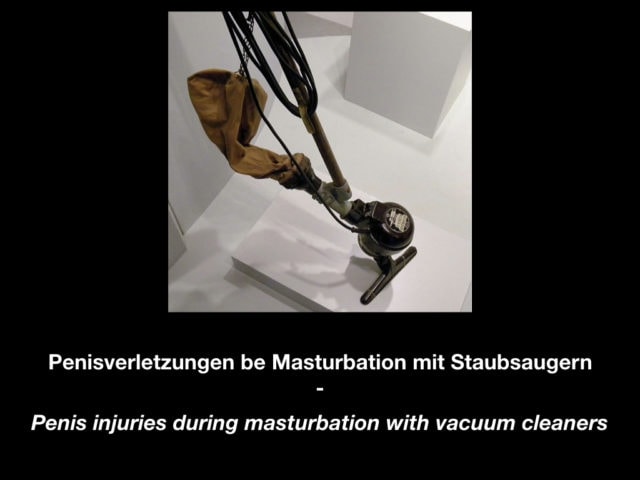 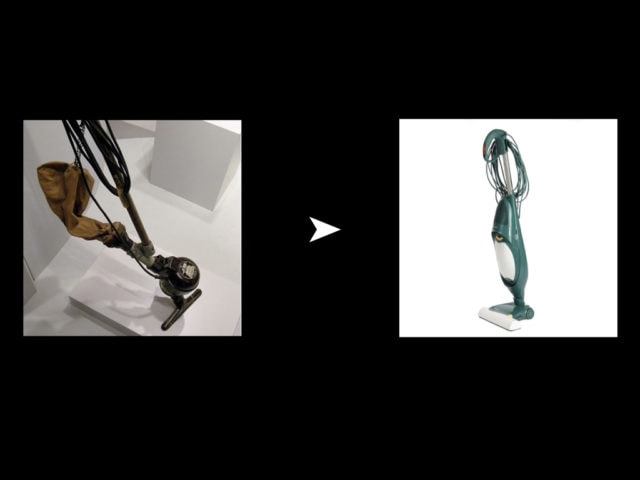 normally in the world of obscure academia that would be that but given the title and the fact that we like laughing at penis related injuries – the dissertation took on a life of its own becoming widely known in Germany ultimately “climaxing” in a spoken word tour of germany where two actors literally did a reading of the dissertation. It is now available as an audiobook. In terms of knowledge translation you’ve got to admit that’s pretty good through it still did take  33 years before the audiobook was finally publihsed. to give credit to vorwork – as soon as the dissertation was published they  updated the model of the cleaner meaning that the particular described injuries would no longer be possible 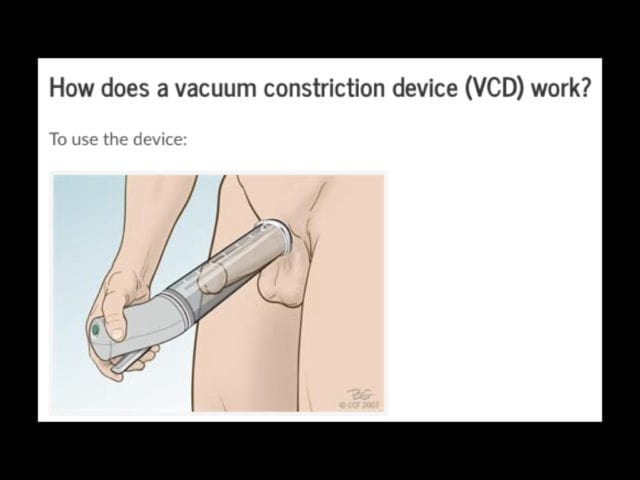 it must be said that these poor patients that were being parodied across the pages of the BMJ were actually somewhat ahead of their time. ultimately today vacuum constriction devices are recommended as one of the myriad treatments of erectile dysfunction. so if a patient says that their doctor told them to put their penis in a vacuum cleaner then there is a little nugget of truth in there somewhere

can be sexual related or…

lots of the sexual related priapism are from injectable agents. This is a well established therapy and is self administerd into one of corpa and diffuses to the other. Usually alprostadil (PGE1) or papaverine (phosphodiesterase inhibitor). 5-10% get priapism

Iin the case of priapism from injectable substances injecting something like phenylephrine (0.1-0.5 mg/ml concentration in 1 ml boluses up to total 1mg) can help (UroWeb has this as first line). Follow this with aspiration from each corpus. 50mls is a reasonable number. Remember there are 2 corpus cavernosa, one on each side so they need separate aspirations

this is an ED favourite and i’m sure all of us have various stories that we’ve been involved with. there’s obviously a lot of stuff that can be inserted into a rectum but i just don’t have time to cover any additional orifices for now.

Van Ophoven et al is a great reference for this.

They begin with a short review of things applied externally to the penis and are willing to horrify readers with the above image of a large hex nut applied to the base of the penis.

they even describe (a now thankfully outdated practice) whereas newlywed brides would place a wedding ring over the penis following wedding night coitus as a means of ensuing potency for life. and i know size isn’t everything but one imagines if a wedding ring fits over it that easily that potency would perhaps be the least of your problems. 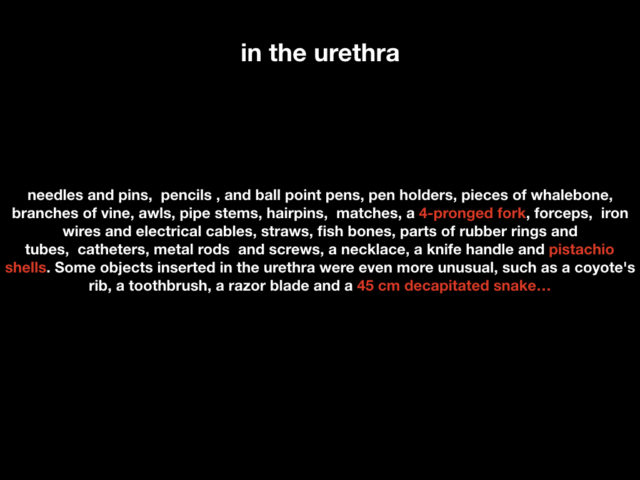 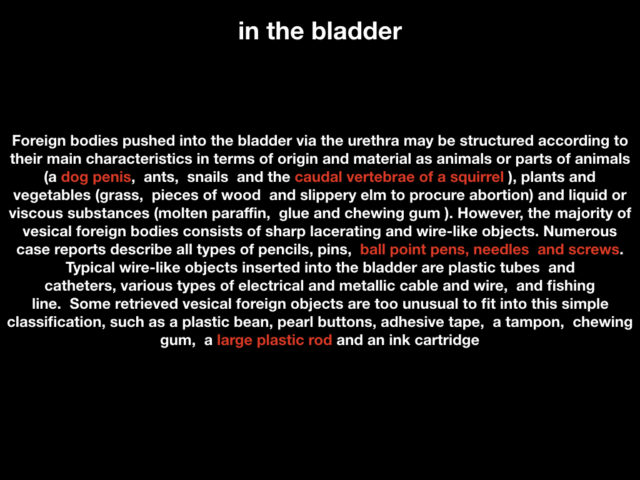 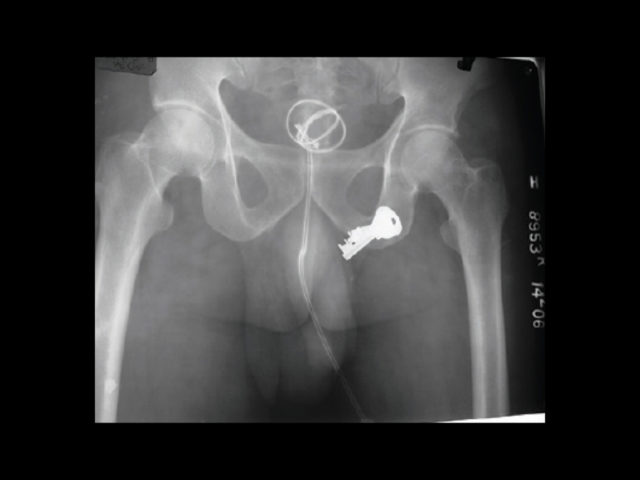 when presented with this the obvious thing would be just to pull the damn thing out, however it is sods law that whatever got shoved in there has immediately tied itself in a knot and refuses to come out. in this case report i am assured that the keys are in his pocket and they just didn’t pull his jeans down. Which i must say given the nature of the X-ray request does seem like the pinnacle of doing your job badly

ED management to be honest is fairly simple and the key thing is don’t make it worse being too aggressive in removal. Get urology involved, get some imaging. Depending on what’s there they meed a urthethotomy to remove a distinct small FB from the urethra or in the case of the tangled cable they often need advanced so the entire object is in the bladder and then removed via an incision through the bladder itself.

A 32-year-old woman was admitted to our emergency department because of an abrupt onset of hives characterized by periorbital redness and swelling, breathlessness, and wheezing. Angioedema and hypotension (90/60 mmHg) were observed.

yes believe it or not this is actually a thing. this is very niche and rare (about 80 cases in the literature) and unlikely to be something you’ll ever see. but it is kind of fascinating. It appears to be typical IgE anaphylaxis to some glycoprotein content of the seminal fluid plasma – not the sperm itself. So ideally you can still get pregnant through artificial insemination if you spin off the plasma. I had a reasonable look at this but I couldn’t find a clear answer to the question – is it all semen or just your current partners. cause if it’s just your current partner’s then maybe it’s time to consider a change. 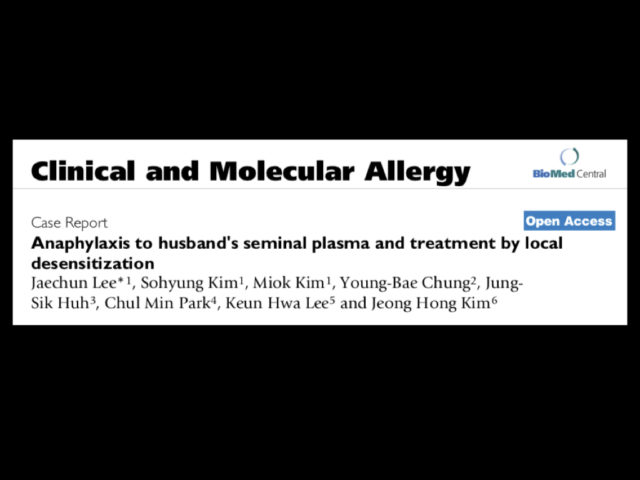 Not only did they diagnose it but because the women wanted to conceive naturally with her husband rather than artificial insemination. So they did what all could allergists did and did local desensitation by injecting subcutaneous plasma of the husbands seminal fluid until there was no reaction. They sent them home with a bottle of wine and an epipen and told them to make babies. Which they subsequently did. 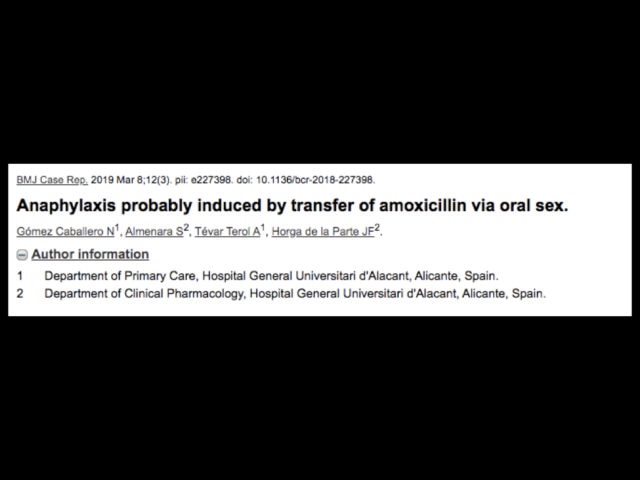 It also seems possible to be anaphylactic to penicillin even if you yourself have not been taking the penicillin but are indeed exposed to it via your partners semen. you know the way the antimicrobial stewardship people in your hospital always want lots of details about the penicillin allergy – well i’m not sure they want this much detail.

The link between sexual climax and SAH is well described. The image above is from a paper looking at aneurysm rupture and sex. it seems to be linked to spikes in BP at orgasm (up to 100 spike in the systolic in men). this is all based on data from the 50s from these two: 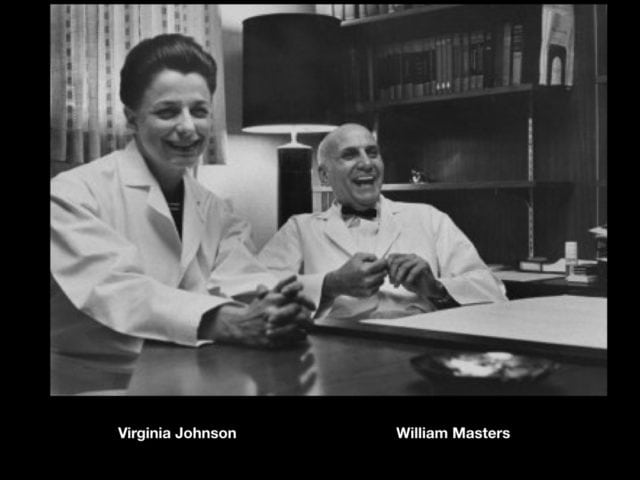 Much of what we know about human sex physiology and orgasm comes from this husband and wife team in the 50s. Virgina Johnson and William Masters. I kid you not – the world’s leading sex researchers are called Virginia Johnson and Willie Masters. You cannot make this stuff up…

In one series of neuro diagnoses presenting to the ED the diagnosis was most commonly coital headachefollowed by SAH, followed by TGA. They all need investigated, don’t worry but it’s OK to advise patients that while this sounds like a worrying headache it’s probably not.