Welcome back to the tasty morsels of critical care podcast. A meandering monologue through critical care fellowship exam preparation.

This week: serotonin syndrome. Much talked about, very common in an exam, quite rare in real life. It doesn’t really get much coverage in Oh’s manual so the following is prepared from the hodge podge of resources listed at the end.

In normal circumstances we produce serotonin from tryptophan. There are a bunch of complicated pathways and mechanisms that are as usual more beyond my comprehension as opposed to beyond the scope of this article. Serotonin does masquerade under its alternate name of 5-hydroxytriptamine which in turn has bred a whole range of receptors of which most relevant is the 5HT2A receptor.

The other piece of the puzzle here is monoamine oxidase (MAO). This enzyme is responsible for metabolism of serotonin. So when we give drugs that inhibit MAO we can also get into trouble

In terms of clinical presentation it’s clear that it exists as a spectrum from mild to ICU level. A common mnemonic used is CAN

To flesh this out in bullet point form, these are the type of features we’re looking for:

The proposed algorithm for diagnosis here is the Hunter criteria. Named for the lush area of NSW where they make nice semillion wine and have the Hunter Valley Toxicology service that named this a few years ago. It is a step wise algorithm that in the limited science available claims a 95% specificity for diagnosis. This is one of those algorithms (like the CAM-ICU) that refuses to stay in my brain so invariably I end up looking it up. Sadly this is not an option in an exam.

It is important to remember that this algorithm only applies in the presence of a serotonergic agent. There is, it seems a quite large number of agents to populate this list. Some of them are obvious with the clues in the name like Selective Serotonin Reuptake Inhibitors (SSRIs) or Monamine Oxidase Inhibitors (MAOI). There are however, a few unusual ones such as linezolid (which acts as an MAOI), fentanyl (which is serotonergic) and usual tox favourites such as cocaine. Tramadol is on the list, which is unsurpising given that it won 1st prize at the recent Toxicology awards for filthiest side effect and interaction profile ever. The final two worth noting are lithium (which can increase sensitivity to 5HT) and methylene blue which sort of acts like a toxicology double agent by playing the hero in methhaemolobinaemia then stabbing you in the back with a serotonin syndrome.

Overall expect to see this in 2 scenarios

The archetypal case of the second presentation was with Libby Zion, the young New York lady who died from unrecognised serotonin syndrome due to inadvertent combination prescribing of serotonergic agents by undersupervised and overtired junior doctors. It is thought to be the key case that led to reforming residency hours in the US from life threatening indentured servitude to the more modern underpaid and overworked trial by fire that it seems today.

Cyproheptadine is the drug that is listed in all the books. This is an ancient 1st gen antihistamine that has an affinity for the 5HT2A receptor greater than that of serotonin. Like all talks about toxicology it provides an excellent reason to use the distracted boyfriend meme, an example of which is shown below. 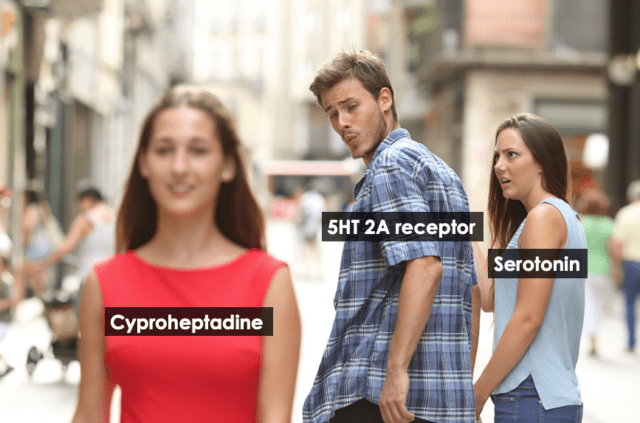 As you can imagine an early generation antihistamine is probably not the ideal agent for this these days, especially with a dosing regime of NG administration every few hours of a drug that you will probably not be able to locate after hours.  It persists, likely due to the challenging evidence base that tox has to work off. The same Hunter Valley Tox people who came up with the criteria have published their experience with chlorpromazine and olanzapine as alternate agents to cyproheptadine. There is little data to support one over the other but a bit like COVID vaccines, the best one is the one you can get. (This is a comparison that may not hold up over time…)

One of the early Hunter Criteria papers from 2003