Welcome back to the tasty morsels of critical care podcast.

Of the many things I poorly understand, I suspect that haematology holds a special place. Knowing the intricacies of the haematological malignancies was not exactly core knowledge for emergency medicine and to be fair an exhaustive knowledge is hardly key to ICM either. However in ICM there is a need to have a broad understanding of what some of the haematological acronyms might mean given that a fair number of these patients end up in the ICU. Most of this post will be navigating the basics of the diseases rather than super specific ICU management.

Oh dedicates a whole chapter, number 101 to the haematoloigical malignancies implying that it is certainly worth our attention. As a broad definition haematological malignancies involve the bone marrow or the lymphoid tissue, they occupy a different niche in the oncology world with the haematologists running the show rather than the general oncologists. They are also distinct in histology and outcomes from the solid organ malignancies.

The attached image on the show notes, comes from the leading source of all medical knowledge, wikipedia. It’s a nice overview of the different types of cells stemming (see what i did there…) from myeloid and lymphoid precursors. It clearly works really well as an educational aid in audio form… 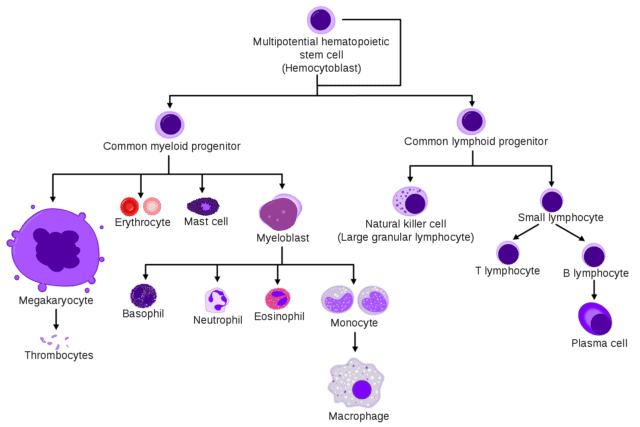 Myeloid cells differentiate into, well, most of blood cells that appear on your FBC, things like red cells, platelets, neutrophils, basophils. On the other hand, lymphoid cells have a much smaller and narrower family tree differentiating into different types of lymphocytes and plasma cells.

For AML there are a variety of causes from various genetically triggered issues, to transformation from a myelodysplastic syndrome or related to prior chemo or radiotherapy. It also includes the very ICU relevant disease of acute promyelocytic leukaemia. As a result, expect to see more AML in the older adult population. ALL is much more common in younger people with a much heavier CNS component, hence the prevalence of intra thecal treatment.

Each of the acute leukaemias has it’s own chronic version. With CLL being a form low grade lymphoma. CML begins as a chronic, somewhat indolent process that accelerates towards a blast crisis towards the end of the disease and for most people is more of a comorbidity than a malignancy.

Lymphomas, understandably come from lymphoid cells, these could be b cells or t cells for example. Classically lymphomas get lumped into two big categories of hodgkins and non-hodgkins with the former generally having the better outcomes.

Finally on the list of common haematological malignancies is multiple myeloma. This is a cancer of plasma cells which are the grown up and left home versions of B lymphocytes. In general plasma cells have developed to produce large amounts of proteinaceous antibodies and are triggered as part of an immune response. In myeloma they are inappropriately making large amounts of their specific protein or globulin reflected in the high total protein count and hyponatraemia associated with this disease.

So that’s a very broad, sub medical student overview of the different malignancies but why would they end up in your ICU?

Sepsis is probably number 1 on the list. People have no immune system due to marrow infiltration or their marrow being wiped out with treatment, and they tend to struggle with the old bugs. They get all the usual bugs that we see, but also we need to worry about candida and aspergillus, plus all their vascular access devices and a wide range of other opportunistic infections. Treat early and broadly and involve your micro or ID folk to be sure you’re getting the right cover for the known and unknowns.

There are a number of rather intense treatments used for haematological malignancy that often precipitate an ICU admission. We’ve already mentioned infection which is a common sequelae of chemotherapy but we’ve covered a lot of the issues in tasty morsel number 34 on chemo agents.

Overall chemotherapy treatment can be viewed in 3 stages:

Predicting outcomes in these patients is tricky and historically there has been a degree of skepticsm in admitting them to intensive care as things end badly with a high degree of frequency. Oh quotes a large case series that currently puts mortality at 60% for this cohort of ICU patients. This is of course high but when you compare it to things like OOHCA it’s certainly not awful.

Finally haematopoetic stem cell transplant is an increasingly used potentially curative treatment for all kinds of hematological malignancies. This has a whole variety of specific indications and complications and rightly deserves its own note in due course.