Welcome back to the tasty morsels of critical care podcast.

Oh dedicates an entire chapter, number 88 to CBRN issues. While not commonly seen you can rest assured that critical care will be expected to turn up and manage these patients if an incident does occur so it is something we need to know fairly well. I will cover the content of chapter 88 here but I will borrow from a lecture I gave at the EuSEM conference back in 2019 when we used to actually go to conferences. Ultimately you’re going to get an edited selection of the available nasty agents.

These agents can be damaging, incapacitating or lethal and can come in persistent (liquids, particles etc) and non persistent (eg gases or volatile substances) forms. We can be exposed through a whole variety of routes from inhalation to the skin to ingestion.

There is a real risk of health care provider exposure and illness so you need to be sure that you are safe in caring for the patient.

When it comes to approaching these I found the CBRN chain of survival to be useful. This was published in 2019 by the Paris fire brigade and is an excellent illustration of the response. There is an image of this in the show notes but to run through it verbally, remembering that these are all meant to be performed pre hospital. 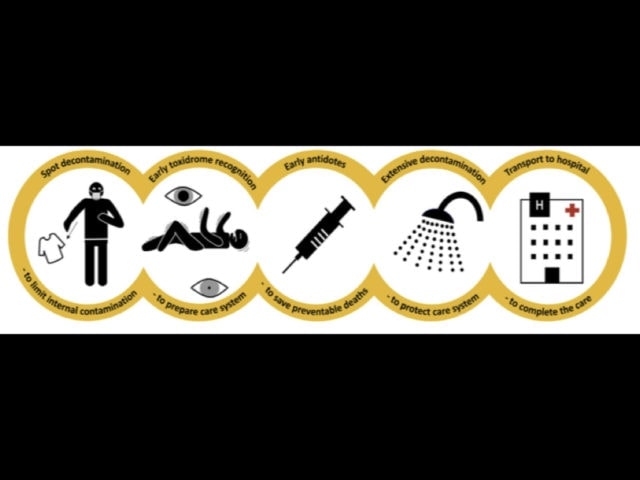 In terms of agents there is quite the cornucopia to choose from but we’ll begin with the chemical ones, and nerve agents such as sarin are up first. Sarin acts as an organophosphate resulting in overwhelming cholinergic activity due to inhibition of acetylcholinesterase. The toxidrome here is on the wet side with wet lungs, wet pants and salivation and diarroeah with small pupils and a side course of apnoea. The knee jerk response should be bucket loads (literally) of atropine to dry things up and some pralidoxime to get the breathing going by resurrecting the inhibited AChE, hopefully enough to enable muscular contraction working again.

When it comes to biological agents we’re just going to look at anthrax for today. Most famously brought to world attention in the days following 9/11 where packets of white powder where mailed to various parts of the US government, some of which actually contained anthrax.

Bacillus anthracis is the bug, a gram+ve rod, usually found in grass eating animals (hence the leather industry exposure) but it is also big in the IDU population in recent years. It causes mainly skin disease in humans but also GI and respiratory disease, usually with <48 hrs incubation period.

Cutaneous anthrax is usually painless with a red papule developing into an ulcer with septicaemia in 20%. Animal exposure is the obvious risk here.

Inhalation anthrax is more what we are worried about which can present as a flu like illness with cyanosis, sub cutaneous oedema and mediastinal widening from lymph nodes which can cause a haemorrhagic mediastinitis. This is unfortunately fairly non specific so you’ll like diagnose this from a culture off the skin lesion. Person to person airborne transmission does not occur so you don’t need a hazmat suit to manage them. Management is good old fashioned antimicrobials inc cipro, penicillin and clindamycin in combination.

Ionising radiation no doubt deserves its own post but to give an ultra summary here. We can get exposed in a few ways eg by radioactive waves such as gamma rays which is what happened to Bruce Banner. This type of radiation can usefully be blocked by something like a big concrete wall. Beta particles are a type of high speed electron emitted by radioactive decay. They penetrate tissue but can be blocked by relatively simple things like wood. If anyone saw the TV series Chernobyl – the extensive skin burns that many of the firefighters received were mainly from beta particles. Alpha particles consist of 2 protons and 2 neutrons bound together. Produced as part of alpha decay of a radioactive substance. They can only pass a a few cm through the air and are easily blocked even by skin and are effectively non toxic unless inhaled or ingested. They are at least 20 times more ionising than gamma or beta. The polonium 210 involved in the murder of Alexander Litvinenko involved alpha particles and the Lancet article on his death is a compelling read.

If your patient was exposed to something like pure gamma or X-ray radiation then there’s little role for decontamination as the radiation as passed through them and out the other side. They are no longer radioactive and the damage is done. If however there are concerns for beta or alpha particles involved (Chernobyl is a good example again) then the patients are likely to be covered externally with radioactive dust containing these ongoing radioactive particles and they may well have inhaled or ingested more particles meaning that their blood and secretions likely contain ongoing radioactivity. A geiger counter can help in assessing external exposure to these things.

Assessing the dose of radiation to the patient is important prognostically. There’s a couple of ways to do this but if you were to actually remember two things then:

a dose >5 gray puts you in the high risk for death.

Tasty Morsels of EM numbers 87 and 88